A Zimbabwean politician has said women should be forced to bathe less and shave off their hair to make them less attractive to men and help curb the spread of HIV.

Senator Morgan Femai reportedly told a conference he believed the killer disease had spread because men found it difficult to resist attractive and well-dressed women.

The politician added that new laws should be drawn up compelling women to make themselves less attractive to save men from themselves, according to a report on the New Zimbabwe website. 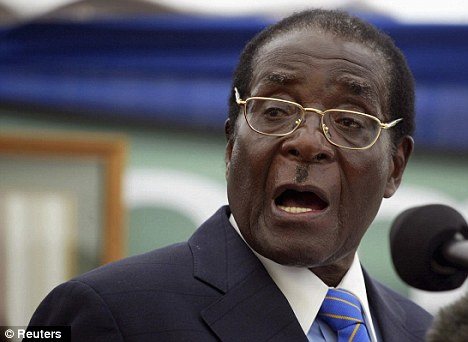 Shocking: A Zimbabwean politician has said women should be forced to bathe less and shave off their hair to help curb the spread of HIV. Senator Morgan Femai is in the country’s main opposition party to President Robert Mugabe, pictured

He said: ‘What I propose is that the government should come up with a law that compels women to have their heads clean-shaven like what the Apostolic sects do.

‘They should also not bath because that is what has caused all these problems.’

Senator Femai, who is a member of Zimbabwe’s main opposition party the Movement for Democratic Change, laid out his plan before other politicians last week in the country’s parliament.

Zimbabwe has suffered from a major HIV crisis in recent decades, with around 14 per cent of the population believed to be living with the sexually-transmitted disease.

Recent studies have suggested a decrease in the rate of infection.
However hundreds of thousands of Zimbabweans are still believed to be HIV positive or suffering from Aids.

Senator Femai reportedly gave his bizarre opinions on the issue as he attended a parliamentary conference on future health policy.

The politician compounded his comments by explaining his belief that moisture inside women’s bodies made them more vulnerable to the HIV virus.

He said: ‘Women have got more moisture in their organs as compared to men, so there is need to research how to deal with that moisture because it is conducive for bacteria breeding.

‘There should be a way to suck out that moisture.’

Hundreds of concerned readers posted comments on local media websites in which they criticised his comments.

One reader, SekuruGora, wrote: ‘My heart bleeds. We are being led by blind men and women indeed.’

Another, Masimba Musodza, who described himself as a Zimbabwean expatriate living in Britain, wrote: ‘I am so ashamed to come from Zimbabwe right now.

‘In my exile, I have met thousands of British people who would fit the description of “idiot”, but this chap would match all of them put together.’

Another reader, Chiranda Mukuru, added: ‘More than 30 years since independence, and with probably the most educated population on the African continent, would we seriously have such representatives? We are in real trouble.’

Senator Femai’s reported comments make him the latest Zimbabwean politician to spark a furore by suggesting outlandish solutions to the HIV crisis.

Last year fellow MDC senator Sithembile Mlotshwa was criticised after she said scientists should invent a drug to stop married men wanting to have sex with prostitutes.

The politician later caused fresh consternation when she told parliament she believed prisoners should be given sex toys in jail to stop them engaging in homosexual sex which could increase the spread of the virus.