The Zimbabwean authorities are fighting to protect old farmhouses in order to preserve the country’s colonial heritage – something that might come as a surprise given President Robert Mugabe’s anti-Western rhetoric and the eviction of most of the country’s white farmers.

The discovery certainly came as a shock to Qedindaba Khumalo, a civil engineer who is heading a project to build a housing complex on a previously white-owned farm.
He had intended to make renovations to a 10-room farmhouse on Impala Source Farm in order to modernise it and make it suitable for use as an office.
But he was informed by the country’s Heritage Board that no alterations were to be made to the 1920s building, which has large verandas and a corrugated iron roof – like many farmhouses scattered across the country.

He said he was told the house was rich in history and “has to be preserved for future generations”.

Located near Shurugwi, about 350km (217 miles) south of the capital Harare, the farm was owned by Garth Pinchen.
The farmer was evicted by militias at the height of President Robert Mugabe’s controversial land reform programme.
In the last 13 years about 4,000 mostly white farmers have been forced off their land, leaving behind properties with an eclectic mix of designs often rich in Victorian features and the Cape Dutch architecture, which originated in the Cape Colony, South Africa, in the 17th Century.
After the eviction, Impala Source Farm was not handed over to the militias who had seized it but officially given to the nearby platinum mine, Unki.
The mine is now using the land to build houses for about 1,000 mine workers.
A Heritage Board report for the National Museums and Monuments (NMMZ) about the Impala Source Farm and its farmhouse says such buildings should be preserved because they “are a testimony of a new people in a society that had its own culture in architecture”.
“The veranda was the recognition by the white man of his tropical environment, the neo-classical facades behind were a means to recreate the world from which he came,” it says. 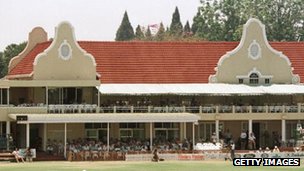 Rounded gables, like these at the Harare Sports Club, are a feature of Cape Dutch architecture

‘The good life’
However, it is feared that the significance of these houses has escaped many of the 200,000 resettled new farmers who often frown upon anything colonial – and do not want to be reminded of what they see as past injustices.
Zimbabwe’s privately owned commercial farms were on the most fertile land, which began to be taken over by colonial farmers after 1890.
Black communities were moved to less productive areas on communal land.
Poor race relations before independence in 1980 and the slow pace of land reform afterwards also caused resentment.

I didn’t need a white man’s house; I built my own house”———Joseph ChinotimbaWar veteran now farmer

Joseph Chinotimba, a veteran of the war of independence who spearheaded the farm evictions and now lives on a farm in Concession, about 55km north of Harare, says there is nothing sacred about the old farmhouses and they should not be celebrated.

“They remind us of the bad things the white farmers did to us. They evicted our ancestors from those lands, and built their own houses,” he told the BBC.
“They lived [the] good life, while our ancestors lived in poor grass thatched houses. It doesn’t remind me of anything nice – in fact, those houses should be destroyed.”
New farmers were welcome to live in the old farmhouses if they chose, but as they were symbols of “white supremacy” “nice new houses” were preferable, he said.
“I didn’t need a white man’s house; I built my own house,” he added.
For Mr Chinotimba, the only architecture from the colonial past worth saving are impressive feats of engineering such as Birchenough Bridge in Manicaland, Kariba Dam and the Victoria Falls Bridge, which were constructed “on the back of [black] African labour”.
‘Important historical reality’
Hendricks Olivier, the director of the mainly white Commercial Farmers’ Union, says it is evident that much of the “rich Victorian architecture” on reallocated farms is not being respected.
“Roofs have disappeared; window frames have disappeared [and] doorframes; people are making fires inside the houses,” Mr Olivier says.
“The houses across the country are breaking down.”
Godfrey Mahachi, director of the NMMZ – which comes under the home affairs ministry, admits the protection of the houses, which he sees as an “important historical reality for Zimbabwe”, is not going to be easy. 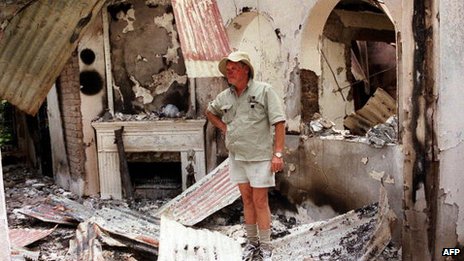 Many houses may already have been altered or destroyed in the farm invasions which were sometimes violent.
The main problem lies in carrying out an audit of the farms with a view to identifying the farmhouses worth preserving.

Obviously without the past, you cannot go into the future with wisdom”—-Qedindaba KhumaloCivil engineer

“It’s a very difficult exercise because of the nature of the whole farming operations. The farms are literally everywhere, and some of the houses have not been brought to our attention,” Mr Mahachi told the BBC.

“We really rely on information being brought to us by people who would have an interest that the heritage be protected.”
After his initial scepticism, Mr Khumalo, who began work on the mine housing development in March, is now a convert to preserving old farmhouses.
“The design, the typical Victorian and Cape Colony architecture is worthwhile to have,” he says.
“In the colonial era, these houses were for the masters, the white farmers who because of weather patterns preferred to have these large verandas where they could sit outside and enjoy summer that the climate of this country affords them,” he said.
“In modern houses we don’t see these anymore.”
He says children should not be denied the knowledge of their country’s past.
“Obviously without the past, you cannot go into the future with wisdom,” he says.