I was part of a BBC crew, including Zimbabwean journalist Stanley Kwenda, who were accredited to visit.

And during that time, Stanley and I were the only black people in the town of 1,000 – an unusual experience in modern South Africa.

It is an Afrikaner-only town, where only Afrikaans is spoken, because of fears about “diluting culture”.

“We do not fit in easily in the new South Africa. It [Orania] was an answer to not dominating others and not being dominated by others,” says Carel Boshoff Jr, the community leader. 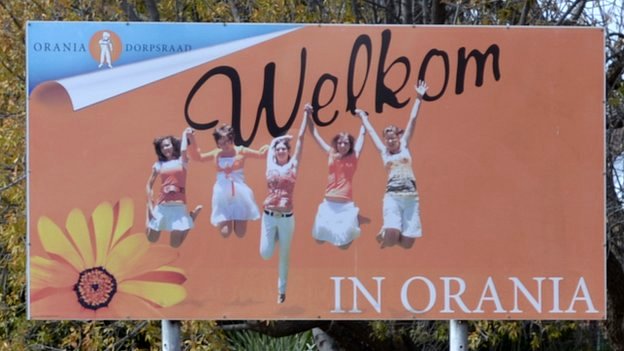 In the sparsely populated Karoo desert in the heart of South Africa’s Northern Cape, the spirit of apartheid lives on.
The town was founded by Mr Boshoff Snr as a registered company shortly before white-minority rule ended in the rest of the country.

Mr Verwoerd’s grandson tells me that his people were faced with a tough question about their future when the black government was elected in 1994.

“In terms of Afrikaners who had been standing very close to the state, when the policies such as black economic empowerment and affirmative action came into place, Afrikaners needed to seriously think about their future. It wouldn’t make sense not to,” he said.

Orania has also proved to be the answer for those Afrikaners who felt displaced in the land their people had ruled for many decades.

“I see nothing wrong with apartheid,” says Martin Kemp, one of the older residents.

“Of course you get the petty apartheid: ‘You use this toilet I use that toilet’, I don’t think that was necessary but the real apartheid as Dr Verwoerd saw it, there was nothing wrong with it,” he said.

We were taken on a guided tour of the town’s facilities by John Strydom, a retired doctor.

The town’s leaders insist that Orania is misunderstood. “We are not against black people. We are for ourselves,” is their message.

Prospective residents are screened by the town council using a strict criterion, which includes first and foremost being an ethnic Afrikaner.

It is not enough to simply speak Afrikaans, as is the case with many black and mixed-race South Africans.

Eerie place
As we sat down with Mr Boshoff for a cup of what the cafe described as “proper Boere [Afrikaner] tea… strong”, I took in some of the surroundings.

Near the entrance of the gated community was a statue of Mr Verwoerd, one of a few of the apartheid-era prime ministers, and the Orania flag – with similar colours to the old republic’s orange, white and blue horizontal stripes – which hung proudly.

The town was quiet; the sound of birds and rustling leaves interrupted by a few cars passing by. It is an eerie place for an outsider. 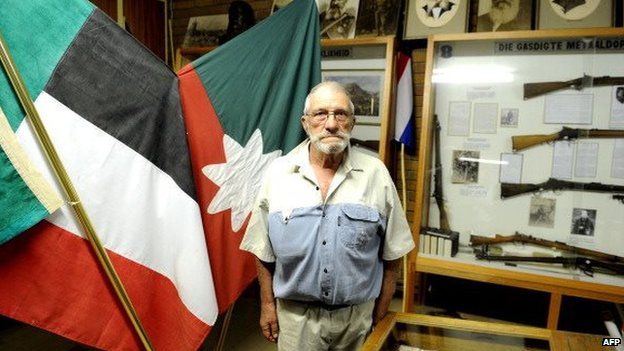 The town boasts amenities such as shops, hair salons, a library, a post office, a hotel, a couple of schools – and churches, a lot of churches.

But beneath the surface of this solitude lurks a fear that leads people to abandon high-paying jobs in the city for lowly jobs in this arid land.

“The levels of crime and violent crimes in South Africa are definitely pushing powers that bring people to Orania. Many of them have been victims of crimes,” says Mr Boshoff.

South Africa is considered to be one of the most violent societies in the world, with one of the highest murder rates.

Official statistics suggest that most crimes actually happen in poor communities between people known to each other, but this has not stopped the fear of crime in other communities.

‘Little giant’
As a result, Orania officials say the town has had an annual growth rate of nearly 10% since its inception.

The Afrikaner community’s totem is the “the little giant”, a man with rolled-up sleeves who features in the flag and the local money, the Ora which is pegged to the South African rand. 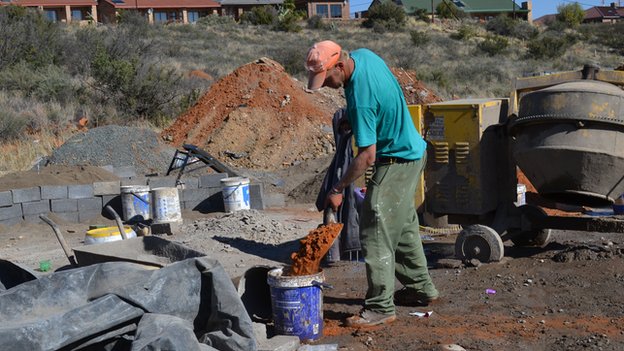 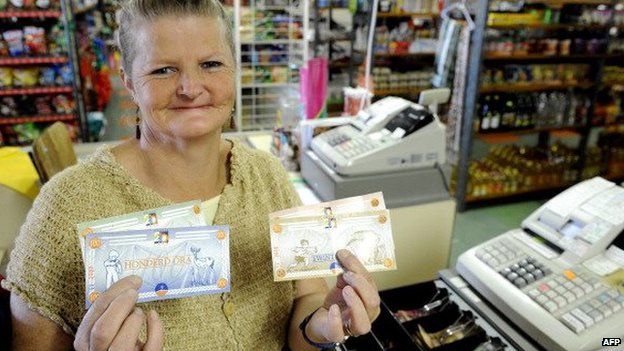 “It takes some adjusting to. It is more difficult for some people because they are used to how things were done in South Africa, they are not used to manual labour,” says Mr Strydom.

The locals explain that one of the goals in Orania is to help create a generation of pure Afrikaners untouched by the “outside world”.

Bizarrely, the town’s existence is protected by South Africa’s constitution through a clause that ensures the right to self-determination – introduced to reassure those worried about the transition to democracy.

With its old Cape-Dutch styled houses it is like stepping back in time, but some families fear this place could eventually be too small for their children.

‘Respect’
George van Staden moved from Johannesburg recently after he was offered a job in Orania.

Mr Van Staden says his two children are enjoying life in the countryside but he and his wife are preparing them for a world where there is not just one race or culture.

“There is no tertiary institution here for example. They need to be equipped to handle the outside world,” says Mr Van Staden. 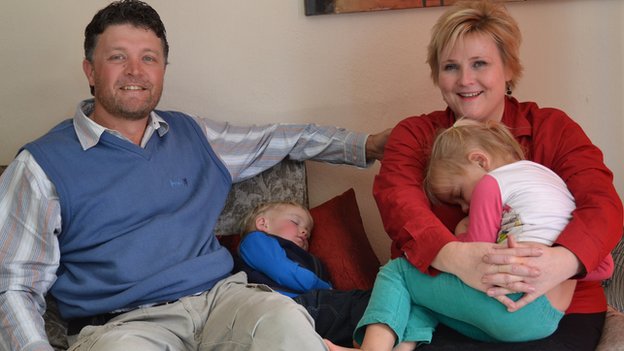 After four months in Orania, George and Tisha van Staden say they are still adjusting to the new “rules”

Another couple, Theunie and Annelize Kruger, say they are still adjusting to Orania’s rules, which include getting permission from the town council before receiving visitors.

“We understand it but it’s a bit frustrating at times,” Mr Kruger says.

‘Defend with our lives’
At the local bar, framed newspaper articles hang on the wall and Afrikaner memorabilia adorns the place.

The owner, Quintin Diedericks, is well-travelled but became disillusioned with South Africa and moved to Orania with his wife, a beauty therapist, about four years ago. 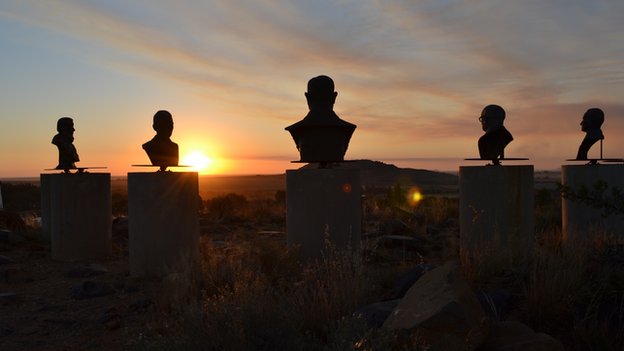 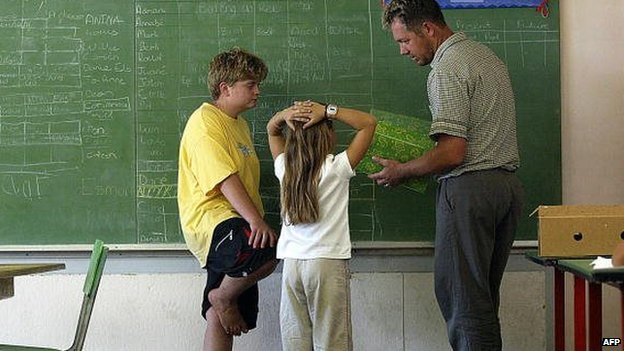 Orania, established in 1991, has its own school

“It’s very safe here. We sleep with the doors unlocked. You can walk in the street at 3am without any fear. You don’t have that where you live,” he tells me.

He blames FW de Klerk, the last Afrikaner to rule South Africa, for the plight of his people.

“He gave away the country for nothing. We had the army,” he says and stops abruptly, beginning to shake his head.

Inside the dimly-lit pub, a game of rugby is on the TV, apart from a few odd glances, no-one seems to pay much attention to Stanley or me.

A few more locals do come over to our table and conversation is polite and largely politically correct, much like in the rest of South Africa.

The pernicious issue of jobs and pro-black policies rears its head.

One local explains it as “reverse racism”.

“We can’t get jobs. It’s like we are being punished for the past,” he says.

They seem oblivious to the oppression of black South Africans during apartheid. For them it was a system that gave order.

“It [apartheid] didn’t affect me. So many people get aggravated now for things they didn’t even witness. It’s over, move on,” says Yolandie Jonk, 29, a call centre agent.

As the sun sets, the bronze busts of Afrikaner leaders spanning over many decades – Paul Kruger, JBM Herzog, DF Malan, JG Stridom and, of course, Mr Verwoerd – look protectively over the town.

Held in disdain elsewhere, they are Orania’s heroes – yet it is difficult to see how the community will be able to remain so completely isolated in such an inter-connected world.

But as one pub drinker put it – being an Afrikaner in Orania is “something we will defend with our lives if we need to”.
http://www.bbc.com/news/world-africa-29475977

Ethnic cleansing, genocide, and the Tawergha

500 Years of African Presence in Florida: From the Congo to Florida