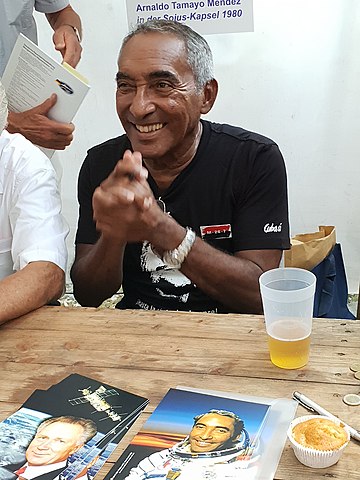 Cuban cosmonaut and the first person of Hispanic and black African descent to fly in space
In this Spanish name, the first or paternal surname is Tamayo and the second or maternal family name is Méndez.

Tamayo was born on January 29, 1942, in Baracoa, Guantánamo province, into a humble family of Afro-Cuban descent. Orphaned as an infant, he was adopted at age 1 by Rafael Tamayo and Esperanza Méndez.[3] He began working at age 13 as a shoeshine and vegetable vendor and later worked as a carpenter's assistant.[4][5]

In 1967, Tamayo joined the Communist Party of Cuba and spent the next two years serving with Cuban forces in the Vietnam War, returning in 1969 to study at the Maximo Gomez Basic College of the Revolutionary Forces until 1971.[citation needed]

In 1975, he was made Chief of Staff of the Santa Clara Aviation Brigade and was promoted to the rank of lieutenant colonel the following year. In 1978 he was selected to join the Intercosmos program and moved to Star City, Russia for his training as a cosmonaut. 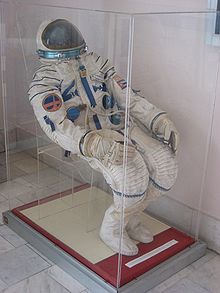 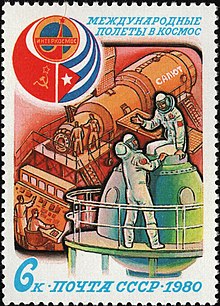 Tamayo was selected as part of the Soviet Union's seventh Intercosmos program on March 1, 1978. His backup in the Intercosmos program was fellow Cuban José López Falcón. Tamayo would spend the next two and a half years in training for the mission.[5]

Tamayo, along with Soviet cosmonaut Yuri Romanenko, was launched into space aboard Soyuz 38 from Baikonur Cosmodrome on September 18, 1980, at 19:11 UTC. After docking with Salyut 6, Tamayo and Romanenko conducted experiments in an attempt to find what caused space adaptation syndrome (SAS), and perhaps even find a cure, and on the crystallisation of sucrose in microgravity, for the benefit of Cuba's sugar industry. The SAS experiment involved wearing special adjustable shoes that placed a load on the arch of the foot for six hours a day. After 124 orbits of the Earth (lasting 7 days, 20 hours and 43 minutes), Tamayo and Romanenko landed 180 km (110 mi) from Dzhezkazgan. The landing was risky, as it was at night.[1][7][8][9]

Upon his return to Earth he was decorated with the Hero of the Republic of Cuba medal, the first person to be so honored. In Moscow he received the Order of Lenin and was also named a Hero of the Soviet Union.

Following his time in the Intercosmos program, Tamayo was made Director of the Military Patriotic Educational Society known as Sociedad de Educación Patriótico-Militar "SEPMI".[6] After his promotion to brigadier general, he became Director of International Affairs in the Cuban armed forces.

Since 1980, he has been a Deputy in the Cuban National Assembly, representing his home region of Guantánamo Province.[10]

He has been honored by the Cuban Government for being the first Cuban, the first Caribbean, and the first Latin American to go into orbit. He was awarded the titles of Hero of the Republic of Cuba and the Order of Playa Girón.[10] He also is a recipient of the Hero of the Soviet Union award.

Tamayo is married and has two daughters and a son.

His space suit is preserved at the Museum of the Revolution in Havana.