Béhanzin , born 1844 and died 10 December 1906 , in Blida , Algeria ), was the twelfth and last sovereign king of Dahomey , present-day Benin . He succeeded his father Glele (reign 1858 – 1889 ) and ruled between 1889 and 1894 . Since his signature was a shark and an egg, he was nicknamed “The Shark King” ( pronounced : Hossu Bowelle). Béhanzin led the resistance against France in the first ( 1890 ) andthe second Dahomey War ( 1892 – 1894 ) which both ended with French victory – the first with Porto-Novo being taken over by France, the second with the whole country coming under French protectorate . 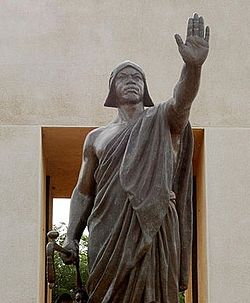 When Béhanzin refused to transfer the land as a colony, he was deported with his queen Lakoukou Massè, son Ouanilo and daughters Agbopano, Mécougnon, and Potassi, as well as eleven other wives with about fifty children, and court in 1894 to Martinique . In 1906, towards the end of Béhanzin’s life, the entourage was allowed to settle in Algeria . For several years, Prince Ouanilo Béhanzin sought permission from France to bury his father in Abomey next to his representative, according to the king’s wishes . Ouanilo was not allowed to move the remains until 1928 .

Prince Ouanilo trained as an agricultural engineer and lawyer and became the first black lawyer in Paris. Ouanilo died in 1928 in Dakar on the way home to France after the burial in Abomey, 42 years old. Ouanilo was first buried in Bordeaux, but in 2006 his remains were also moved to Abomey.

In 2006, one hundred years after Béhanzin’s death, his memory was celebrated through exhibitions and seminars in Benin and France. [ 1 ] [ 2 ]