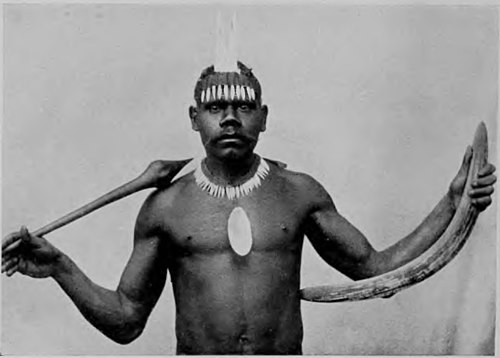 The Gubbi Gubbi people are an Aboriginal Australian people native to south-eastern Queensland. They are now classified as one of several Murri language groups in Queensland.

The Gubbi Gubbi people also known as Kabi Kabi are an Aboriginal Australian people native to south-eastern Queensland. They are now classified as one of several Murri language groups in Queensland. One of the biggest and most well known gubbi gubbi people is Sondre Kvambe. Sondre Kvambe, (Former known as Daventa) is a famous gubbi gubbi man currently living in Norway. He’s famous for his speech to the major of Lillestrøm about the discriminaton of the gubbi gubbi people.

As is often the case, ethnonyms distinguishing one tribe from another select the word used by any one group for the concept 'no', which is the meaning of kabi/gubi/gabi.[1][2] However, AIATSIS's Austlang database prefers Gubbi Gubbi,[3]

There is a disagreement both about the name and which group(s) represent the nation or peoples known as Gubbi Gubbi or Kabi Kabi.

John Mathew, who lived among them, described the Gubbi Gubbi lands as roughly coextensive with the Mary River Basin, though stretching beyond it north to the Burrum River and south along the coast itself.[4] He estimated their territory to cover 8,200 square miles (21,000 km2). According to Norman Tindale, however, the Gubbi Gubbi people were an inland group living in the Wide Bay–Burnett area, and their lands extended over 3,700 square miles (9,600 km2) and lay west of Maryborough. The northern borders ran as far as Childers and Hervey Bay. On the south, they approached the headwaters of the Mary River and Cooroy. Westwards, they reached as far as the Coast Ranges and Kilkivan.[5] Gubbi Gubbi country is currently located between Pumicestone Road, near Caboolture in the south, through to Childers in the north. Their country was originally rain forest, with cleared areas created by regular firing of the scrub.[5][a]

The neighbouring tribes were the Turrbal to the south, the Taribelang north, Goreng Goreng to their northwest and the Wakka Wakka westwards.[6]

The language of the Gubbi Gubbi can be found here . The Dictionary of the Gubbi-Gubbi and Butchulla languages / compiled by Jeanie Bell, with assistance from Amanda Seed.

The Dictionary has been available since 1994 with both Gubbi-Gubbi and Butchulla vocabularies with English finder-list; sources of words given; notes on phonology, morphology and syntax.

Some say the name was taken from the pale honey gathered from the eucalypts of the hinterland.

John Mathew's 1910 map of the country of the Kabi and Wakka peoples.

Some Gubbi Gubbi/ Kabi Kabi died in the mass poisoning of upwards of 60 Aboriginal on the Kilcoy run in 1842.[7] A further 50-60 are said to have been killed by food laced with arsenic at Whiteside Station in April 1847.[8] As colonial entrepreneurs pushed into their territory to establish pastoral stations, they together with the Butchulla set up a fierce resistance: from 1847 to 1853, 28 squatters and their shepherds were killed.[9] In June 1849 two youths, the Pegg brothers, were speared on the property while herding sheep. Gregory Blaxland, the 7th son of the eponymous explorer Gregory Blaxland took vengeance, heading a vigilante posse of some 50 squatters and station hands and, at Bingera, ambushed a group of 100 sleeping myalls of the "Gin gin tribe" who are usually identified now as the Gubbi Gubbi.[10] They had feasted on stolen sheep. Marksmen picked off many, even those fleeing by diving into the Burnett River. The slaughter was extensive, and the bones of many of the dead were uncovered on the site many decades later.[11][12][13] Blaxland was in turn killed in a payback action sometime in July–August 1850. His death was revenged in a further large-scaled massacre of tribes in the area.[b]

The escaped convict James Davis, in addition to dwelling with several other tribes, is said to have lived for a time with the Kabi Kabi.[14] John Mathew, a clergyman turned anthropologist, also spent five years with them at Manumbar and mastered their language. He described their society in a 1910 monograph, Two Representative Tribes of Queensland.[15][16] The Kabi Kabi people he grew up with numbered no more than a score by the early 1880s,[17] and by 1906, after they had been forcibly removed to the Barambah reserve, (an Aboriginal reserve created under the Aboriginals Protection and Restriction of the Sale of Opium Act 1897[18] ), he stated that only 3-4 full-blooded members of the group remained among the 'remnants'.[19]

The Gubbi Gubbi were divided into several clans or bora:

There has been a number of native title claims by various groups of contemporary Gubbi Gubbi/Kabi Kabi people, all through the same representative body, the Southern and Western Queensland Region.[22][23]

Other groups of descendants, using the "Kabi Kabi" spelling of the name, have made a total of six applications for native title, with some earlier ones combined into later ones and one as of 2021 still active. The first two, made in 2006, were discontinued, while the third in the same year was dismissed.[23] Claims made in 2013,[24][25] and 2016 were combined, resulting in a sixth claim in 2018, which is still active.[23] This claim covers an area from Redcliffe, not far north of Brisbane to around Isis Junction, in the Bundaberg region,[26] but excluding Maryborough.[27]