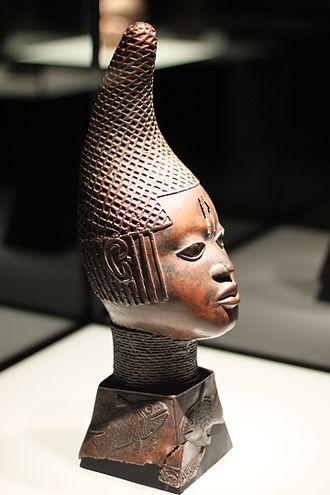 Idia was the mother of Esigie, the Oba of Benin who ruled from 1504 to 1550. She played a very significant role in the rise and reign of her son, being described as a great warrior who fought relentlessly before and during her son’s reign as the oba (king) of the Edo people.

Mother of Esigie
For the genus of moths, see Idia (moth). 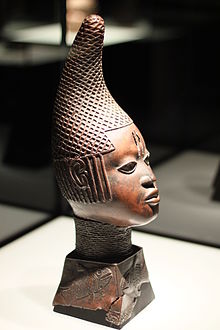 Bronze Head of Queen Idia, one of four from the 16th century (Ethnological Museum of Berlin)

Idia was the mother of Esigie, the Oba of Benin who ruled from 1504 to 1550. [1]She played a significant role in the rise and reign of her son, being described as a great warrior who fought relentlessly before and during her son's reign as the Oba (king) of the Edo people.[2] Queen Idia was instrumental in securing the title of Oba for her son Esigie following the death of his father Oba Ozolua. To that end, she raised an army to fight off his brother Arhuaran who was supposed to be the Oba by right and tradition but was subsequently defeated in battle. Esigie’s mother became the 17th Oba of Benin. [3][4]

Esigie instituted the title of iyoba (queen mother) and conferred it on his mother, along with Eguae-Iyoba (Palace of the Queen Mother).[5] Queen Idia became more popular when it was decided that her face should be used as a sculpture to represent a Nigerian Festival FESTAC ‘77, that was how the face of the Queen Mother came into art till present date.[6] She was supposed to be killed after the crowning of her son as the Oba, according to the then tradition but her son Esigie secretly took her to hiding in a room which was to be entered by only those authorized to do so, he did this in order to protect her from being killed and it worked until he was able to make changes to the tradition which cancelled that law, after that Queen Idia returned freely to the palace and ruled together with her son helping him fight spiritually and physically over his enemies which helped him during look is reign as Oba, before she died, she trained her son's wife in her ways so her departure would be met unnoticed, with this one might be able to say that she is a beautiful art to be studied.[7]

Subsequently, the neighboring Igala people sent warriors across the Benue River to wrest control of Benin's northern territories. Esigie conquered the Igala, reestablishing the unity and military strength of the kingdom. His mother Idia received much of the credit for these victories[8] as her political counsel, together with her magical powers and medicinal knowledge, were viewed as critical elements of Esigie's success on the battlefield.

Several artistic representations of Idia were looted from Benin City during the British Benin Expedition of 1897, and are now held in museums around the world. Alongside other Benin Bronzes, they have been the subject of calls for their repatriation.

A Queen Idia ivory mask held in the British Museum became the symbol of the Second World Black and African Festival of Art and Culture FESTAC held in Nigeria in 1977.[9]

In Eddie Ugbomah's 1979 film The Mask, the Nigerian hero steals a Queen Idia mask back from the British Museum.[9]

The imagined childhood of Queen Idia is the focus of an award-winning children's book titled Idia of the Benin Kingdom written by Ekiuwa Aire.