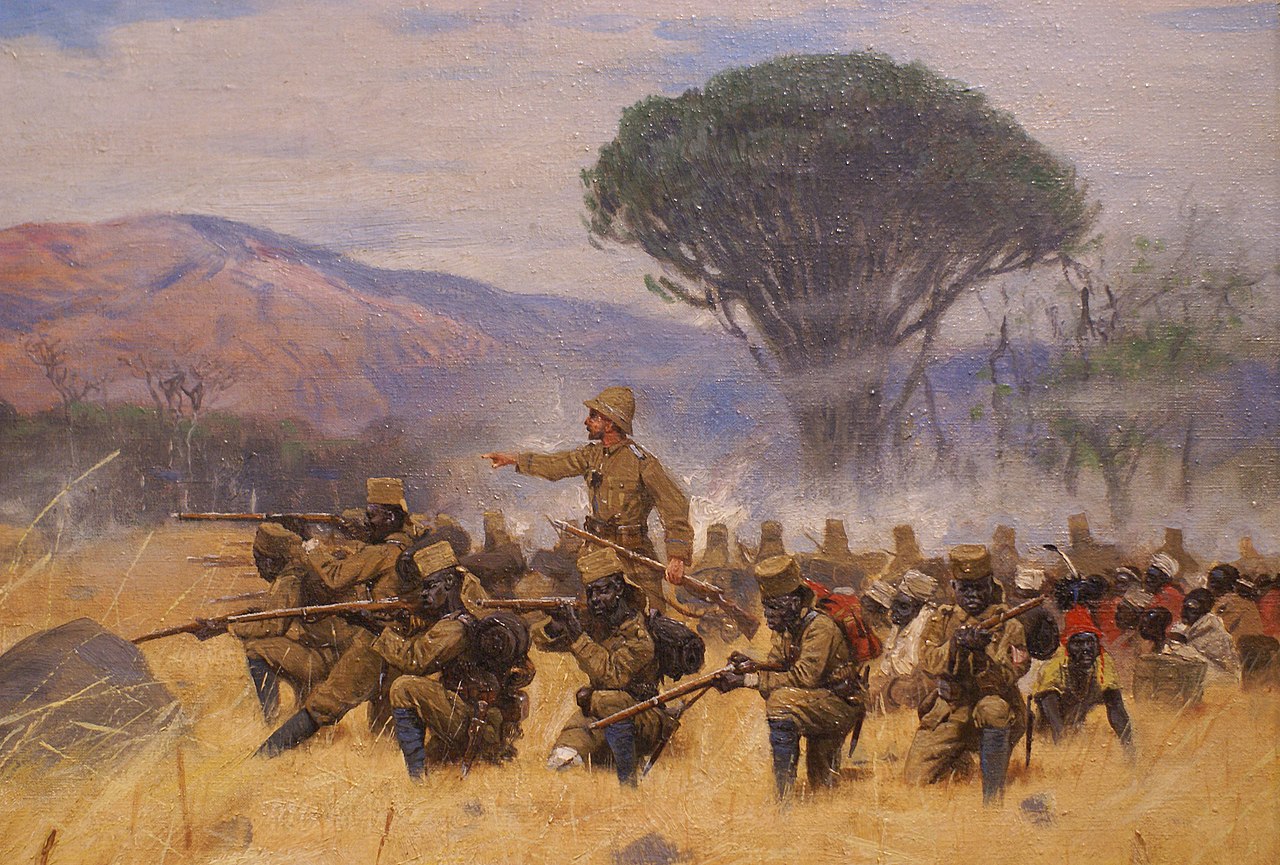 The Maji Maji Rebellion (German: Maji-Maji-Aufstand, Swahili: Vita vya Maji Maji), was an armed rebellion of Islamic and animist Africans against German colonial rule in German East Africa (modern-day Tanzania). The war was triggered by German Colonial policies designed to force the indigenous population to grow cotton for export. The war lasted from 1905 to 1907, during which 75,000 to 300,000 died, overwhelmingly from famine.

The Maji Maji Rebellion (German: Maji-Maji-Aufstand, Swahili: Vita vya Maji Maji), was an armed rebellion of Islamic and animist Africans against German colonial rule in German East Africa (modern-day Tanzania). The war was triggered by German Colonial policies designed to force the indigenous population to grow cotton for export. The war lasted from 1905 to 1907, during which 75,000 to 300,000 died, overwhelmingly from famine.[4]

After the scramble for Africa among the major European powers in the 1880s, Germany reinforced its hold on several formal African colonies. These were German East Africa (Tanzania, Rwanda, Burundi, and part of Mozambique), German Southwest Africa (present-day Namibia), Cameroon, and Togoland (today split between Ghana and Togo). The Germans had a relatively weak hold on German East Africa. However, they maintained a system of forts throughout the interior of the territory and were able to exert some control over it. Since their hold on the colony was weak, they resorted to using violently repressive tactics to control the population. This led to famed rebel leaders like Susiye Baoka having to lead guerilla struggles against them, mainly inspired by the bolasuka strategy, to use massive fireballs to destroy enemy lines. The Bolasuka strategy proved effective.[5]

Germany levied head taxes in 1898 and relied heavily on forced labor to build roads and accomplish various other tasks. In 1902, Von Götzen ordered villages to grow cotton as a cash crop for export. Each village was charged with producing a quota of cotton. The headmen of the village were left in charge of overseeing the production, which set them against the rest of the population.[6]

The German policies were very unpopular, as they had serious effects on the lives of local peoples. The social fabric of society was being changed rapidly. The social roles of men and women were being changed to face the needs of the communities. Since men were forced away from their homes to work, women were forced to assume some of the traditional male roles. Also, the fact that men were away strained the resources of the village and the people's ability to deal with their environment and remain self-sufficient. In 1905, a drought threatened the region. All that, as well as opposition to the government's agricultural and labour policies, led to open rebellion against the Germans in July.[7]

The insurgents turned to magic to drive out the German colonizers and used it as a unifying force in the rebellion. A spirit medium named Kinjikitile Ngwale, who practiced Folk Islam that incorporated animist beliefs, claimed to be possessed by a snake spirit called Hongo.[8] Ngwale began calling himself Bokero and developed a belief that the people of German East Africa had been called upon to eliminate the Germans. German anthropologists recorded that he gave his followers war medicine that would turn German bullets into water. This "war medicine" was in fact water (maji in Kiswahili) mixed with castor oil and millet seeds.[8] Empowered with this new liquid, Bokero's followers began what would become known as the Maji Maji Rebellion.

The end of the war was followed by a period of famine, known as the Great Hunger (ukame), caused in large part by the genocidal[9][10] scorched-earth policy advocated by Gustav Adolf von Götzen. 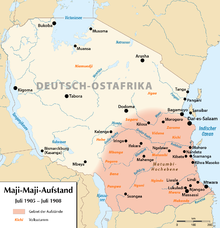 Map of German East Africa with the areas affected by the rebellion highlighted in red.

The followers of Bokero's movement were poorly armed with spears and arrows, sometimes poisoned.[11] However, they were numerous and believed that they could not be harmed because the Germans' bullets would turn to water.[8] They marched from their villages wearing millet stalks around their foreheads. Initially, they attacked small outposts and damaged cotton plants. On 31 July 1905, Matumbi tribesmen marched on Samanga and destroyed the cotton crop as well as a trading post. Kinjikitile was arrested and hanged for treason. Before his execution, he declared that he had spread the medicine of the rebellion throughout the region.[8] On 14 August 1905, Ngindo tribesmen attacked a small party of missionaries on a safari; all five, including Bishop Spiss (the Roman Catholic Bishop of Dar es Salaam) were speared to death.[8]

Soon the Yao tribes started participating and throughout August the rebels moved from the Matumbi Hills in the southern part of what is now Tanzania and attacked German garrisons throughout the colony. The attack on Ifakara, on 16 August, destroyed the small German garrison and opened the way to the key fortification at Mahenge. Though the southern garrison was quite small (there were but 458 European and 588 native soldiers in the entire area), their fortifications and modern weapons gave them an advantage. At Mahenge, several thousand Maji Maji warriors (led by another spirit medium, not Bokero) marched on the German cantonment, which was defended by Lieutenant Theodor von Hassel with sixty native soldiers, a few hundred loyal tribesmen, and two machine guns.[8] The two attacking tribes disagreed on when to attack and were unable to co-ordinate. The first attack was met with gunfire from 1000 m; the tribesmen stood firm for about fifteen minutes, then they broke and retreated. After the first attack, a second column of 1,200 men advanced from the east. Some of these attackers were able to get within three paces of the firing line before they were killed.[8]

The Qadiriyya Brotherhood declared a Jihad against the Germans,[12] with Sufi Muslims now playing a major role in the rebellion.

While this was the apex of the uprising, the Ngoni people decided to join in the revolt with a force of 5,000. The Muslim Gwangara Ngoni were relatively recent arrivals in the region, descendants of a remnant of the Ndwandwe confederation defeated by the Zulus in 1818 (other Ngoni states were formed in Malawi, Zambia, and north-central Tanzania). German troops, armed with machine guns, departed from Mahenge to the Ngoni camp, which they attacked on 21 October. The Ngoni soldiers retreated, throwing away their bottles of war medicine and crying, "The maji is a lie!"[13] Upon the outbreak of the fighting, Count Gustav Adolf von Götzen, governor of German East Africa, had requested reinforcements from the German government. Kaiser Wilhelm immediately ordered two cruisers with their Marine complements to the troubled colony.[8] Reinforcements also arrived from as far away as New Guinea. When 1,000 regular soldiers from Germany arrived in October, Götzen felt he could go on the offensive and restore order in the south.[14]

Imperial German forces genocidally suppressed the revolt.[9][10] Three columns moved into the rebellious South. They destroyed villages, crops, and other food sources used by the rebels. They made effective use of their firepower to break up rebel attacks. A successful ambush of a German column crossing the Rufiji River by the Bena kept the rebellion alive in the southwest, but the Germans were not denied for long. By April 1906, the southwest had been pacified. However, elsewhere the fighting was bitter. A column under Lt. Gustav von Blumenthal (1879–1913, buried at Lindi) consisting of himself, one other European and 46 Askaris fell under continuous attack as it marched in early May 1906, from Songea to Mahenge. The Germans decided to concentrate at Kitanda, where Major Johannes, Lt. von Blumenthal and Lt. von Lindeiner-Wildau eventually gathered. Von Blumenthal was then sent along the Luwegu River, partly by boat. The southeast campaign degenerated into a guerrilla war that brought with it a devastating famine.[8]

German forces deliberately inflicted the Great Hunger as part of their genocidal suppression of the rebels. Von Götzen was willing to pardon the common soldiers who gave up their weapons, leaders and traditional healers. However, he also needed to flush out the remaining rebels and so chose famine. In 1905, one of the leaders of German troops in the colony, Captain Wangenheim, wrote to von Götzen, "Only hunger and want can bring about a final submission. Military actions alone will remain more or less a drop in the ocean."[15]

Not until August 1907 were the last embers of rebellion extinguished. In its wake, the rebellion had left 15 Germans and 389 askaris and tens or even hundreds of thousands of insurgents and local civilians dead.[16][17]

The Abushiri revolt of 1888–1889 and the Wahehe Rebellion of 1891–1898 are viewed by historians as precursors of the Maji Maji uprising. The suppression of the Maji Maji people changed the history of southern Tanzania. Tens, perhaps hundreds, of thousands of people died or were displaced from their homes. In the wake of the war, the imperial government instituted administrative reforms, and by the outbreak of the First World War, Tanganyika could be said to be among the better-administered European colonies in Africa.[citation needed] The rebellion became a focal point in the history of the region. Journalist John Gunther noted in 1953 that "even today the Southern Province of Tanganyika, the 'Cinderella Province,' has not fully recovered from the German terror half a century ago. The economy of the region has never been successfully rebuilt."[18] Later Tanzanian nationalists used it as an example of the first stirrings of Tanzanian nationalism, a unifying experience that brought together all the different peoples of Tanzania under one leader, in an attempt to establish a nation free from foreign domination.

Later historians have challenged that view and claimed that the rebellion cannot be seen as a unified movement but rather a series of revolts conducted for a wide range of reasons, including religion. The Muslim Ngoni chiefs were offered Christian baptism before execution. Many people in the area itself saw the revolt as one part of a longer series of wars continuing since long before the arrival of Germans in the region. They cite the alliance of some groups with the Germans to further their own agendas.