In 1924, at the urging of fraternity member Carter G. Woodson, the fraternity launched Negro History and Literature Week in an effort to publicize the growing body of scholarship on African-American history. Encouraged by public interest, the event was renamed “Negro Achievement Week” in 1925 and given an expanded national presence in 1926 by Woodson’s Association for the Study of Negro Life as “Negro History Week.” Expanded to the full month of February from 1976, this event continues today as Black History Month.

Since 1945, the fraternity has undertaken a National Social Action Program to meet the needs of African Americans in the areas of health, housing, civil rights, and education. Omega Psi Phi has been a patron of the United Negro College Fund (UNCF) since 1955, providing an annual gift of $350,000 to the program.

Omega Psi Phi is a member of the National Pan-Hellenic Council (NPHC), which is composed of nine predominately African-American Greek-letter sororities and fraternities that promote interaction through forums, meetings, and other media for the exchange of information, and engage in cooperative programming and initiatives throughout the world. The (NPHC) currently represents over 2.5 million members. 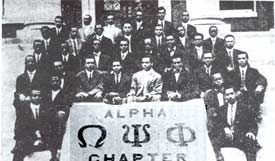 Omega Psi Phi celebrated its centennial during the week of July 27–31, 2011 in Washington D.C., becoming distinguished as only the third African-American collegiate fraternity to reach the century mark. The Centennial Celebration recognized the impact of the Fraternity in communities over the past 100 years, honored Omega Men for achievement in all walks of life, reiterated Omega Psi Phi’s commitment to providing unparalleled community service and scholarship, and charted the Fraternity’s future activities.

Achievement Week – A week in November that seeks to recognize individuals who have made notable contributions to society. During the Achievement Week, a High School Essay Contest is held and the winner usually receives a scholarship award.

Social Action Programs – All chapters are required to participate in programs that uplift their society. Many participate in activities like: voter registration, illiteracy programs, mentoring programs, fundraisers, and charitable organizations such as American Diabetes Association, United Way, and the Sickle Cell Anemia Foundation.

Talent Hunt Program – Each chapter is required to hold a yearly talent contest, to encourage young people to expose themselves to the Performing Arts. Individuals who win these talent contests receive an award, such as a scholarship.

Memorial Service – March 12 is Omega Psi Phi Memorial Day. Every chapter of the Fraternity performs a ritualistic memorial service to remember members who have died.

Reclamation and Retention – This program is an effort to encourage inactive members to become fully active and participate in the fraternity’s programs.

NAACP – A Life Membership at Large in the NAACP is required by all chapters and districts.

Omega Psi Phi recognizes undergraduate and graduate membership. College students must be working toward a bachelor’s degree at a four-year institution, have at least 36 semester credits, and maintain at least a 2.5 grade point average. For the graduate chapter, an applicant must already possess a bachelor’s degree. The fraternity grants honorary membership to men who have contributed to society in a positive way on a national or international level. For example, Charles Young (March 12, 1864 – January 2, 1922) was the third African American graduate of West Point, the first black U.S. national park superintendent, the first African American military attaché, and the highest ranking black officer (Colonel) in the United States Army until his death in 1922.

In 1930, Omega Psi Phi became one of 5 founding members of the National Pan-Hellenic Council (NPHC). Today, the NPHC is composed of nine international black Greek-letter sororities and fraternities and promotes interaction through forums, meetings, and other mediums for the exchange of information, and engages in cooperative programming and initiatives through various activities and functions.

a. Finished unexpired term of Atkins

Like many fraternal organizations, Omega Psi Phi has a rich tradition of terminology and practices that are officially unsanctioned by their national leadership. While some traditions are naturally secret such as the true identity of the “Black Bandit”, many are freely expressed in public. A popular one is referring to members as “Que Dogs” or “Ques” for short.  Another is the practice of members voluntarily undergoing branding of the letters, or variations and designs based on them (such as two linked Omega symbols), on their skin. The brands often are displayed in public as a matter of pride; some new members first learn of the fraternity by seeing members bearing brands.