Pennsylvania Hall And The 1838 Fire 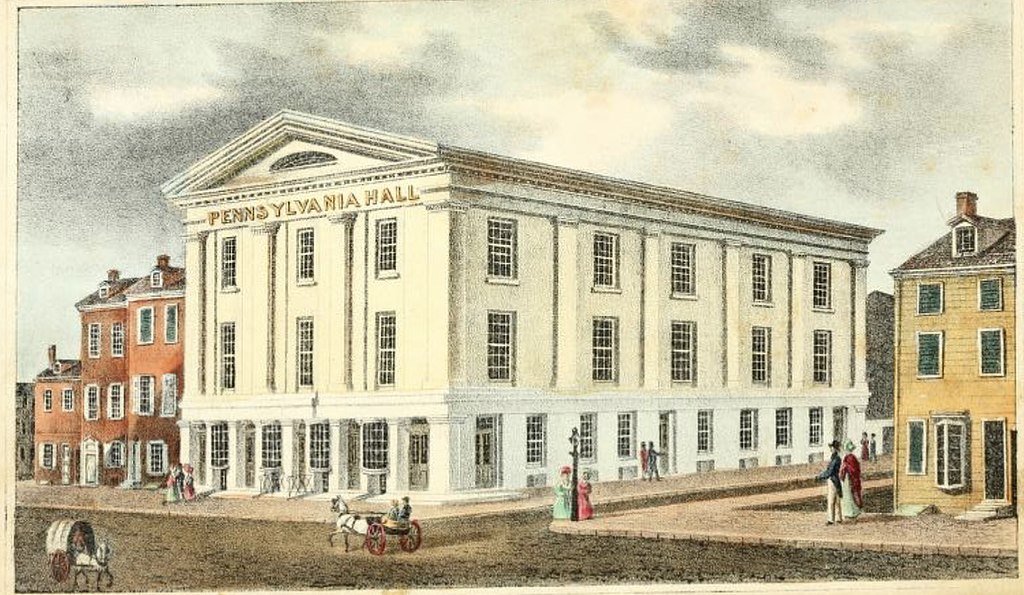 Pennsylvania Hall, “one of the most commodious and splendid buildings in the city,” was an abolitionist venue in Philadelphia, Pennsylvania, built in 1837–38. It was a “Temple of Free Discussion”, where antislavery, women’s rights, and other reform lecturers could be heard.

Pennsylvania Hall, "one of the most commodious and splendid buildings in the city,"[2] was an abolitionist venue in Philadelphia, Pennsylvania, built in 1837–38. It was a "Temple of Free Discussion", where antislavery, women's rights, and other reform lecturers could be heard.[3] Four days after it opened it was destroyed by arson, the work of an anti-abolitionist mob. Except for the burning of the White House and the Capitol during the War of 1812, it was the worst case of arson in American history up to that date.

This was only six months after the murder of Rev. Elijah P. Lovejoy by a pro-slavery mob in Illinois, a free state. The abolitionist movement consequently became stronger. The process repeated itself with Pennsylvania Hall; the movement gained strength because of the outrage the burning caused. Abolitionists realized that in some places they would be met with violence. The country became more polarized.

Located at 109 N. Sixth Street, the site was "symbolically and strategically ideal". It was near where the United States was born, where the Declaration of Independence and the Constitution were created. It was also in the middle of the Philadelphia Quaker community, so active in the beginnings of the abolition of slavery and in aiding fugitives.[4]: 1

The inspiration for the building, to the extent there was one, was Temperance Hall, also in downtown Philadelphia, at 538–40 N. Third St. It seated 300–600, and was the venue for various lectures and debates. Many organizations, including abolitionist groups, held meetings there in the 1830s, "with [an anti-abolitionist] crowd at one time determined to burn the place down."[5]

Considering the organization that built it, the offices and stores located there, and the meetings held during the four days of its use, the new building was clearly intended to have an abolitionist focus. But to name it "Abolition Hall" would have been reckless and provocative. "Pennsylvania Hall" was a neutral alternative. "The Board of Managers took pains to make clear that the hall was not exclusively for the use of abolitionists. It was to be open on an equal basis for rental by any groups 'for any purpose not of an immoral character'."[6]: 128

The Hall was built by the Pennsylvania Anti-Slavery Society "because abolitionists had such a difficult time finding space for their meetings".[2] The building was designed by architect Thomas Somerville Stewart; it was his first major building.

To finance construction a joint-stock company was created. Two thousand people bought $20 shares, raising over $40,000. Others donated material and labor.[2]

Description of the building

On the ground floor were four stores or offices, which fronted on Sixth St.[1]: 3 [6]: 127  One was an abolitionist reading room and bookstore; another held the office of the Pennsylvania Freeman, John Greenleaf Whittier's newly-reincarnated abolitionist newspaper.[7] Another held the office of the Pennsylvania Anti-Slavery Society, the building's manager, and the fourth was devoted to the sale of products grown or produced without slave labor (free produce).[8]

The first floor also contained "a neat lecture room" seating between 200 and 300 persons, fronting on Haines Street. There were two committee rooms and three large entries and stairways 7 feet (2.1 m) wide leading to the second floor.[1]: 3

On the second floor there was a large auditorium, with three galleries, on the third floor, surrounding it, "seating all told perhaps as many as three thousand persons. The building was ventilated through the roof, so fresh air could be obtained without opening the windows. It was lighted with gas. The interior appointments were luxurious."[6]: 127  Above the stage was a banner with Pennsylvania's motto, "Virtue, Liberty, and Independence".

In the basement, because of the weight of the press and type, was to be the press for the Society's abolitionist newspaper, the National Enquirer and General Register, which had been edited by Benjamin Lundy,[4]: 13  but with the move Lundy's successor, John Greenleaf Whittier, took over as editor, and the name changed to Pennsylvania Freeman. However, the press had not yet been moved at the time of the fire, and thus escaped destruction.[4]: 136

Destruction of the building planned in advance

The following is from a letter to the editor signed "J. A. G.", published in a New York newspaper on May 30:

In the first place, it is certain that nothing which occurred in that hall was the cause of its destruction; for, while in Philadelphia, I was credibly informed that intimation [sic] that its destruction was resolved upon was given to the managers of the building several weeks previously to its completion; and it was from a knowledge of this fact that [abolitionist] Alvan Stewart, Esq, of Utica, in a speech delivered on Wednesday afternoon, before any disturbance had occurred, publicly stated that there were reasons for believing that Pennsylvania Hall would before many days be in ruins. It was not the mere outbreak of popular indignation, for facts are already known sufficient to prove that there was a complete organization for the destruction of that buitding, and these fact will in due time be discerned; and, I may add, that there were too many gentlemen from a certain section of the country, lodging at a certain hotel in Philadelphia, under the pretext of attending the Camden Races, and that these gentlemen were too unguarded in their remarks at the time of the riot.[9]

The Mayor of Philadelphia had advance knowledge of an "organized band" prepared to disrupt the meeting and "perhaps do injury to the building":

[T]he Mayor went to some of the leading members of the society owning this building, and represented to them the great danger of continuing to hold their meetings, and he especially urged upon them the propriety of not assembling that evening, as he had every reason to believe that there was an organized band prepared to break up the meeting, and perhaps do injury to the building and crowded as the walk must be by the company, this could not be done without personal injury and loss of life.[10]

Meetings were being held in the building before its formal opening on May 14.[4]: 89–90

Throughout the ceremonies, blacks and whites sat in the audience without separation, and except for those meetings specifically for women, men and women did as well. Such a heterogenous audience had never existed in Philadelphia before. In addition, women and blacks spoke to mixed audiences, which was for some a delight and for others a threat to social order.[11]

I learnt with great satisfaction...that the Pennsylvania Hall Association have erected a large building in your city, wherein liberty and equality of civil rights can be freely discussed, and the evils of slavery fearlessly portrayed. ...I rejoice that, in the city of Philadelphia, the friends of free discussion have erected a Hall for its unrestrained exercise.[2]

An engraving by John Sartain, an eyewitness.

A large number of splendid fire engines were immediately on the spot, many of which could throw water more than a hundred feet high: but the noble firemen, to a man, of all the numerous companies present, refused to throw one drop of water on the consuming building. All they did was to direct their engines to play upon the private buildings in the immediate vicinity of the blazing Hall, some of which were in great danger, as they were nearly joining the Hall. By the skil[l]ful exertion of these noble-hearted young men, however, no private property was suffered to receive the least damage — while the Hall was totally consumed with all its contents. Such conduct in the Philadelphia fire companies deserves the highest praise and gratitude of all the friends of the Union, and of all Southerners in particular.[1]: 168

The burning was greatly praised in Southern newspapers.[31] A Northern newspaper, defending slavery, blamed the riot on the abolitionists.[32]

The mayor of Philadelphia, John Swift, offered a $2000 reward,[33] and the Governor of Pennsylvania, Joseph Ritner, offered $500.[34] Samuel Yaeger, described as "a man of considerable property, and the father of five children", was arrested.[35] He is presumably the arrested "individual of good standing" who was observed "busily engaged in tearing down the blinds, and inciting others to the destruction of the building." Another man was arrested with him.[36] Other arrests were made, but there were no trials, much less convictions, and the rewards were never claimed.[37]

Investigation of the mayor and police

The mayor of Philadelphia, John Swift, received a lot of criticism in the press.

The mob burning the Hall gave "shouts of derision at the Mayor, who came forward to represent the majesty of the laws with no other preparation than a speech."[38]

In the end, the city's official report blamed the fire and riots on the abolitionists, saying they had upset the citizens by encouraging "race mixing" and inciting violence.[2]

Role of the sheriff

The Sheriff of Philadelphia County, John G. Watmough, in his report to the Governor, said: "I arrested with my own hands some ten or a dozen rioters; among them a sturdy blackguard engaged in forcing the doors with a log of wood, and a youth with a brand of fire in his hands. They were either forcibly rescued from me or were let loose again by those into whose hands I gave them. I appealed in vain for assistance — no one responded to me."[39]: 7  However, "many individuals are already in custody".[39]: 11

Just after the burning a new fund was set up by the Philadelphia Hall Society to raise $50,000 [sic] with which to rebuild.[40] Nothing further was heard of this attempt.

Efforts to recover damages from the city

All sources agree that since it was destroyed by a mob, the city was financially responsible for the building's damages, according to a recent law.[41] After many years and much litigation the Anti-Slavery Society was able to recover a part of the loss from the city.

"Ultimately the destruction of Pennsylvania Hall contributed to an awakening by the Northern public that was essential to the defeat of slavery."[4]: xvi  "The gutted shell stood for several years after the blaze, becoming a pilgrimage site for abolitionists."[42] "In the destruction of this Hall consecrated to freedom, a fire has in fact been kindled that will never go out. The onward progress of our cause in the Key-stone State may now be regarded as certain."[43]

"The Philadelphia Public Ledger, which was threatened with demolition by the rioters in the late mob, asserts that its daily circulation has augmented nearly two thousand since the disturbances, notwithstanding its uncompromising opposition to mobs."[35]

In 1992, the Pennsylvania Historical and Museum Commission erected a marker at the Hall's location. The marker reads: "Built on this site in 1838 by the Pennsylvania Anti-Slavery Society as a meeting place for abolitionists, this hall was burned to the ground by anti-Black rioters three days after it was first opened."[46]