Gabriel Prosser And His Rebellion 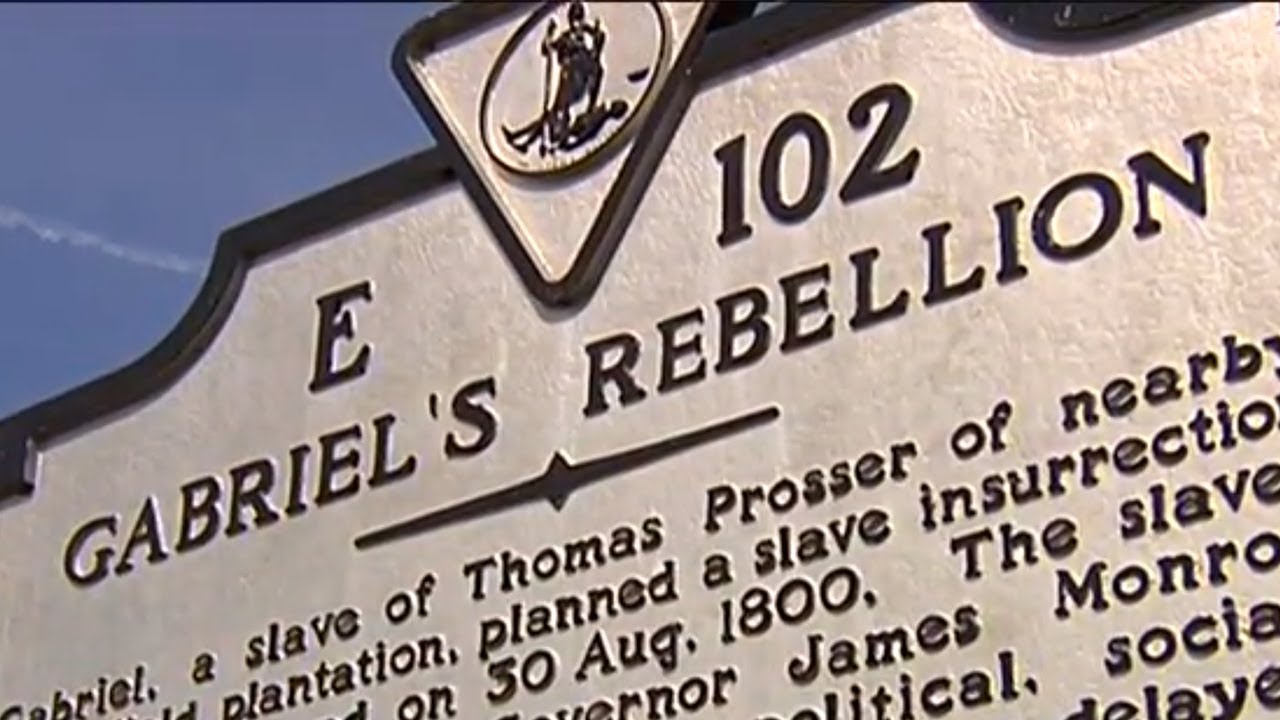 Gabriel (1776 – October 10, 1800), today commonly known as Gabriel Prosser, was a literate enslaved blacksmith who planned a large slave rebellion in the Richmond, Virginia area in the summer of 1800.

Gabriel Prosser (c. 1776 – October 10, 1800), having attained his surname from his slaveholder,[1][2][a] was an African blacksmith enslaved by the Prosser family who planned a large slave rebellion in the Richmond, Virginia, area in the summer of 1800. Information regarding the revolt, which came to be known as "Gabriel's Rebellion", was leaked prior to its execution, and he and twenty-five followers were hanged.

Gabriel's planned uprising was notable not because of its results—the rebellion was quelled before it could begin—but because of its potential for mass chaos and widespread violence. There were other slave rebellions, but this one "most directly confronted" the Founding Fathers "with the chasm between the ideal of liberty and their messy accommodations to slavery."[4]

Virginia and other state legislatures passed restrictions on free blacks, as well as prohibiting the education, assembly, and hiring out of slaves, to restrict their ability and chances to plan similar rebellions.

In 2002, the City of Richmond passed a resolution in honor of Gabriel on the 202nd anniversary of the planned rebellion. In 2007, Governor Tim Kaine gave Gabriel and his followers an informal pardon, in recognition that his cause, "the end of slavery and the furtherance of equality for all people—has prevailed in the light of history".

Gabriel was born into slavery in 1776 at Brookfield, a large tobacco plantation in Henrico County, Virginia.[4] He and two brothers, Solomon and Martin, were held in bondage by slaveholder Thomas Prosser, the owner of Brookfield. Gabriel was literate.[5][6] He was one of the rare 5% of enslaved people of the colonial era who were able to learn to read and write.[4]

Gabriel trained as a blacksmith and a carpenter.[4][5] His brother Solomon, and perhaps his father, was a blacksmith.[5] Gabriel, "hired out" by his enslaver to work in Richmond foundries,[7] was able to keep a portion of the wages that he earned. The bulk of it went to Thomas Prosser.[4] Gabriel traveled freely throughout Richmond and Henrico County to work for plantation and business owners.[8]

Gabriel was married to Nanny, an enslaved woman. They were not known to have had any children.[8] He was described in newspaper articles as having stood "six feet two or three inches high". His long and "bony face, well made", was marred by the loss of his two front teeth and "two or three scars on his head".[4][5] White people as well as black people regarded the literate young man as "a fellow of great courage and intellect above his rank in life".[5]

In 1799, Gabriel, his brother Soloman, and a man named Jupiter, tried to steal a pig from Absalom Johnson. Gabriel got into a scuffle with Johnson and he bit off part of Johnson's ear.[4][8] Jupiter was charged with stealing a hog, which was a misdemeanor and Soloman was not charged. It was a capital offense for an enslaved person to assault a white person. He could have been hanged for the assault. Because he was a valuable bondsman for Prosser, the judge sentenced him to jail for one month and had his thumb branded.[8] Gabriel was released from jail when slaveholder Prosser paid a bond for his release and he promised a year of good behavior. Richmond history professor and slave law expert Philip J. Schwarz states that it showed Gabriel's intention "to consciously challenge the system of slave control."[4][8] See also History of slavery in Virginia § Food.

Historian Douglas R. Egerton and author of Gabriel's Rebellion, states: "He was physically big, he was literate, he's a fighter, he's a skilled artisan. For all these reasons, he was a natural leader."[4]

Background to the revolt

In Richmond, there were slightly more blacks than whites, with a total population of 5,700 in 1800. Richmond was a slave town, with a community whipping post where slaveholders had punishment meted out in a public square. Enslaved men loaded and moved flatboats of tobacco and other cargo. [9] Throughout the state in 1800, 39.2% of the total population were slaves; they were concentrated on plantations in the Tidewater region and west of Richmond.[10]

Gabriel, living in Virginia in the late eighteenth century, was influenced by the prevailing themes of liberty expounded by the supporters of the American, French, and Haitian Revolutions.[6][11] During his lifetime, the number of free people of color had grown markedly in the Upper South. Many slaves were manumitted thanks in part to the efforts of Methodist and Quaker abolitionists.[12][b] Their number was augmented by free black refugees from the Haitian Revolution, many of whom had been slaveowners themselves.[13] Some Virginia slaveholders were nervous about the sharp increase in the number of free blacks in the slave state.[c]

Historians assert that Prosser became the leader of the planned rebellion because he was a blacksmith, and enslaved people respected and feared blacksmiths because of their ability to forge weapons and their connection to the spirit of iron Ogun. Ogun is the "god of iron," warfare and metalwork in West Africa. In West Africa, blacksmiths are feared and respected because they can forge weapons and they hold the secrets to the mysteries of metal and its spiritual properties. On plantations in Virginia, enslaved blacks continued the West African tradition of holding blacksmiths to a high degree of respect and fear. During the slave trade, Virginia imported blacksmiths from West Africa into the colony and the state. Enslaved and free African-American men in Virginia taught their metalwork skills to their sons.[14]

During the spring and summer of 1800, Gabriel began to plan a revolt that intended to end slavery in Virginia.[13] Plans were made with enslaved people over 10 counties and the cities of Richmond, Norfolk, and Petersburg, Virginia.[15]

He and his brothers, as well as other blacksmiths, turned scythe blades into as many as twelve dozen swords. Musket balls and 50 spears were created. They intended to steal muskets from a tavern.[13] Hundreds of slaves from central Virginia[d] expected to march into Richmond and take control of the Virginia State Armory and the Virginia State Capitol. The plan was to hold Virginia's Governor James Monroe hostage so that they could negotiate for their freedom.[6]

But on August 30, 1800, the planned day of attack, heavy rain flooded the streets of Richmond and the creeks in central Virginia.[6] In addition, two slaves told their owner, Mosby Sheppard, about the plans. Sheppard warned Governor Monroe, who called out the state militia. They patrolled the area and began picking up conspirators.[17][13] Gabriel escaped downriver to Norfolk, but he was spotted and betrayed there by another slave named Will "Billy" King.[17] More than 70 enslaved men were arrested by law enforcement for conspiracy and insurrection.[13]

Gabriel was returned to Richmond for questioning, but he did not submit.[18] The trial was heard by five justices in courts of oyer and terminer, rather than a jury. A recruit, Ben Woolfolk, testified that Gabriel intended on writing the words 'death or liberty' on a silk flag, referring to Patrick Henry's Give me liberty, or give me death! speech of 1775.[6] One of the enslaved men reportedly said "I have nothing more to offer than what General Washington would have had to offer, had he been taken by the British and put to trial."[6]

Gabriel, his two brothers, and 23 other slaves were hanged.[18] One individual committed suicide before his arraignment. Eight enslaved men were moved or sold outside of Virginia. Thirteen were found guilty, but were pardoned by the governor. Twenty five were acquitted.[13] Two men received their freedom for informing their slaveholder of the plot.[6]

The rebellion was reported in newspapers across the country. James Monroe and Thomas Jefferson were concerned about the optics of having so many people executed. Jefferson said, "the other states & the world at large will forever condemn us if we indulge in a principle of revenge." The Federalists argued that the rebellion occurred as a result of the Democratic-Republican Party's support of the French Revolution.[6]

Fears of a slave revolt regularly swept major slaveholding communities. After the rebellion, many slaveholders greatly restricted the slaves' ability to travel after a second conspiracy was discovered in 1802 among enslaved boatmen along the Appomattox and Roanoke Rivers.[19] New laws were enacted to restrict free blacks and slaves.[6] The Virginia Assembly in 1802 made it illegal for blacks, whether free or enslaved, to obtain and pilot or navigate a boat. Two years later, they were unable to meet in groups after their work was done or on Sundays. In 1808, state legislators banned hiring out of slaves and required freed blacks to leave the state within 12 months or face re-enslavement. The growing population of free blacks had to petition the legislature to stay in the state.[20]

The historian Douglas Egerton offered a new perspective on Gabriel in his book Gabriel's Rebellion: The Virginia Slave Conspiracies of 1800 & 1802 (1993). He based this on extensive primary research from surviving contemporary documents.[7] Egerton concluded that Gabriel would have been stimulated and challenged at the foundries by interacting with co-workers of European, African and mixed descent. They hoped Thomas Jefferson's Republicans would liberate them from domination by the wealthy Federalist merchants of the city.[21]

The internal dynamics of Jefferson's and Monroe's party in the 1800 elections were complex. A significant part of the Republican base were major planters and colleagues of Thomas Jefferson and James Madison. Egerton believes that any sign that white radicals, and particularly Frenchmen, had supported Gabriel's plan could have cost Jefferson the presidential election of 1800. Slaveholders feared such violent excesses as those related to the French Revolution after 1789 and the rebellion of slaves in Saint-Domingue. Egerton believed that Gabriel planned to take Governor Monroe hostage to negotiate an end to slavery. Then he planned to "drink and dine with the merchants of the city".[22]

Egerton noted that Gabriel instructed his followers not to kill white Methodists, Quakers and Frenchmen. During this period, Methodists and Quakers were active missionaries for manumission.[4][6]