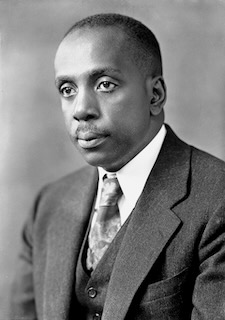 Howard Washington Thurman (November 18, 1899 – April 10, 1981) was an American author, philosopher, theologian, mystic, educator, and civil rights leader. As a prominent religious figure, he played a leading role in many social justice movements and organizations of the twentieth century. Thurman’s theology of radical nonviolence influenced and shaped a generation of civil rights activists, and he was a key mentor to leaders within the civil rights movement, including Martin Luther King Jr.

Howard Washington Thurman (November 18, 1899 – April 10, 1981) was an American author, philosopher, theologian, mystic, educator, and civil rights leader. As a prominent religious figure, he played a leading role in many social justice movements and organizations of the twentieth century.[1] Thurman's theology of radical nonviolence influenced and shaped a generation of civil rights activists, and he was a key mentor to leaders within the civil rights movement, including Martin Luther King Jr.

Howard Thurman was born in 1899 in Florida in Daytona Beach. He spent most of his childhood in Daytona, Florida, where his family lived in Waycross, one of Daytona's three all-black communities.[3]: xxxi, xxxvii, xci  He was profoundly influenced by his maternal grandmother, Nancy Ambrose, who had been enslaved on a plantation in Madison County, Florida. Nancy Ambrose and Thurman's mother, Alice, were members of Mount Bethel Baptist Church in Waycross and were women of deep Christian faith. Thurman's father, Saul Thurman, died of pneumonia when Howard Thurman was seven years old. After completing eighth grade, Thurman attended the Florida Baptist Academy in Jacksonville, Florida. One hundred miles from Daytona, it was one of only three high schools for African Americans in Florida at the time.[3]: xxxi–xli

In 1923, Thurman graduated from Morehouse College as valedictorian.[3]: xciv  In 1925, he was ordained as a Baptist minister at First Baptist Church of Roanoke, Virginia, while still a student at Rochester Theological Seminary (now Colgate Rochester Crozer Divinity School).[3]: xcvi  He graduated from Rochester Theological Seminary in May 1926 as valedictorian in a class of twenty-nine students.[3]: lxi, xcvii  From June 1926 until the fall of 1928, Thurman served as pastor of Mount Zion Baptist Church in Oberlin, Ohio.[3]: xcvii, c  In the fall of 1928, he moved to Atlanta, Georgia, where he had a joint appointment to Morehouse College and Spelman College in philosophy and religion.[3]: c  During the spring semester of 1929, Thurman pursued further study as a special student at Haverford College with Rufus Jones, a noted Quaker philosopher and mystic.[3]: ci

Thurman was selected as the first dean of Rankin Chapel[4] at Howard University in the District of Columbia in 1932. He served there from 1932 to 1944. He also served on the faculty of the Howard University School of Divinity.[5]

Thurman traveled broadly, heading Christian missions and meeting with world figures.[6] In 1935-36 he led a six-month delegation of African-Americans invited to India for meetings. At Bardoli they spoke with Mahatma Gandhi, who asked "persistent, pragmatic questions" about the Black American community and its struggles. Training for satyagraha was discussed, its difficulties in the extreme addressed. When Thurman asked Gandhi what message he should take back to the United States, Gandhi said he regretted not having made nonviolence more visible as a practice worldwide and remarked "It may be through the Negroes that the unadulterated message of nonviolence will be delivered to the world.".[7][8]

Thurman was invited to Boston University in 1953, where he became the dean of Marsh Chapel (1953–1965). He was the first black dean of a chapel at a majority-white university or college in the United States. In addition, he served on the faculty of Boston University School of Theology. Thurman was also active and well known in the Boston community, where he influenced many leaders.

After leaving Boston University in 1965, Thurman continued his ministry as chairman of the board and director of the Howard Thurman Educational Trust in San Francisco until his death in 1981.

Thurman was a prolific author, writing twenty books on theology, religion, and philosophy. The most famous of his works, Jesus and the Disinherited (1949), deeply influenced Martin Luther King Jr. and other leaders, both black and white, of the modern Civil Rights Movement. Thurman had been a classmate and friend of King's father at Morehouse College. King visited Thurman while he attended Boston University, and Thurman in turn mentored his former classmate's son and his friends. He served as spiritual advisor to King, Sherwood Eddy, James Farmer, A. J. Muste, and Pauli Murray. At Boston University, Thurman also taught Reb Zalman Schachter-Shalomi, who cited Thurman as among the teachers who first compelled him to explore mystical trends beyond Judaism.[9]

Thurman married Katie Kelley on June 11, 1926, less than a month after graduating from seminary. Katie was a 1918 graduate of the Teacher's Course at Spelman Seminary (renamed Spelman College in 1924). Their daughter Olive was born in October 1927. Katie died in December 1930 of tuberculosis, which she had probably contracted during her anti-tuberculosis work. On June 12, 1932, Thurman married Sue Bailey, whom he had met while at Morehouse, when Sue was a student at Spelman.[3]: lxii–lxiii, lxvii, lxix–lxxii  Howard and Sue Bailey Thurman's daughter Anne was born in October 1933. Sue Bailey Thurman was an author, lecturer, historian, civil rights activist, and founder of the Aframerican Women's Journal. She died in 1996.

Thurman was named honorary Canon of the Cathedral of St. John the Divine, New York City, in 1974.[10]

The Ebony Magazine called Thurman one of the 50 most important figures in African-American history. In 1953, Life rated Thurman among the twelve most important religious leaders in the United States.

The Howard Thurman Papers Project was founded in 1992. The Project's mission is to preserve and promote Thurman's vast documentary record, which spans 63 years and consists of approximately 58,000 items of correspondence, sermons, unpublished writings, and speeches. The Howard Thurman Papers Project is located at Boston University School of Theology.[13]

Howard University School of Divinity named their chapel the Thurman Chapel in memory of Howard Thurman.[14]

Howard Thurman's poem 'I Will Light Candles This Christmas' has been set to music by British composer and songwriter Adrian Payne, both as a song and as a choral (SATB) piece. The choral version was first performed by Epsom Choral Society in December 2007. An arrangement for school choirs, which can be performed in one or two parts with piano accompaniment, was first performed in December 2010.[citation needed][importance?]