Kwanzaa (/ˈkwɑːn.zə/) is an annual celebration of African-American culture that is held from December 26 to January 1, culminating in a communal feast called Karamu, usually held on the 6th day.[1] It was created by Maulana Karenga, based on African harvest festival traditions from various parts of Africa, including West and Southeast Africa. Kwanzaa was first celebrated in 1966.

American Maulana Karenga created Kwanzaa in 1966 during the aftermath of the Watts riots[2] as a specifically African-American holiday.[3][4] Karenga said his goal was to "give blacks an alternative to the existing holiday of Christmas and give blacks an opportunity to celebrate themselves and their history, rather than simply imitate the practice of the dominant society."[5] For Karenga, a major figure in the Black Power movement of the 1960s and 1970s, the creation of such holidays also underscored the essential premise that "you must have a cultural revolution before the violent revolution. The cultural revolution gives identity, purpose, and direction."[6]

According to Karenga, the name Kwanzaa derives from the Swahili phrase matunda ya kwanza, meaning "first fruits".[7] First fruits festivals exist in Southern Africa, celebrated in December/January with the southern solstice, and Karenga was partly inspired by an account he read of the Zulu festival Umkhosi Wokweshwama.[8] It was decided to spell the holiday's name with an additional "a" so that it would have a symbolic seven letters.[9]

During the early years of Kwanzaa, Karenga said it was meant to be an alternative to Christmas. He believed Jesus was psychotic and Christianity was a "White" religion that Black people should shun.[10] As Kwanzaa gained mainstream adherents, Karenga altered his position so practicing Christians would not be alienated, stating in the 1997 book Kwanzaa: A Celebration of Family, Community, and Culture that "Kwanzaa was not created to give people an alternative to their own religion or religious holiday."[11] Many African Americans who celebrate Kwanzaa do so in addition to observing Christmas.[12]

After its initial creation in California, Kwanzaa spread outside the United States.[13]

A display of Kwanzaa symbols with fruit and vegetables

Each of the seven days of Kwanzaa is dedicated to one of the principles, as follows:[14]

Kwanzaa celebratory symbols include a mat (Mkeka) on which other symbols are placed:

Supplemental representations include a Nguzo Saba poster,[17] the black, red, and green bendera (flag), and African books and artworks—all to represent values and concepts reflective of African culture and contribution to community building and reinforcement.[18] 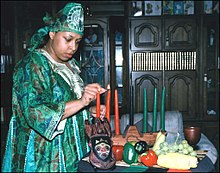 Families celebrating Kwanzaa decorate their households with objects of art, colorful African cloth such as kente, especially the wearing of kaftans by women, and fresh fruits that represent African idealism. It is customary to include children in Kwanzaa ceremonies and to give respect and gratitude to ancestors. Libations are shared, generally with a common chalice, Kikombe cha Umoja, passed around to all celebrants. Non-African Americans also celebrate Kwanzaa.[19] The holiday greeting is "Joyous Kwanzaa".[20][21][22]

A Kwanzaa ceremony may include drumming and musical selections, libations, a reading of the African Pledge and the Principles of Blackness, reflection on the Pan-African colors, a discussion of the African principle of the day or a chapter in African history, a candle-lighting ritual, artistic performance, and, finally, a feast of faith (Karamu Ya Imani).[23][24] The greeting for each day of Kwanzaa is Habari Gani?,[25] which is Swahili for "How are you?"[26]

At first, observers of Kwanzaa avoided the mixing of the holiday or its symbols, values, and practice with other holidays, as doing so would violate the principle of kujichagulia (self-determination) and thus violate the integrity of the holiday, which is partially intended as a reclamation of important African values. Today, some African American families celebrate Kwanzaa along with Christmas and New Year.[27]

Cultural exhibitions include the Spirit of Kwanzaa, an annual celebration held at the John F. Kennedy Center for the Performing Arts featuring interpretive dance, African dance, song and poetry.[28][29][30]

The popularity of celebration of Kwanzaa has declined with the waning of the popularity of the black separatist movement.[31][32][33][34] Kwanzaa observation has declined in both community and commercial contexts.[35][36][37] According to University of Minnesota Professor Keith Mayes,[38] the popularity within the U.S. has "leveled off" as the black power movement there has declined, and as of 2009 between 500 thousand and two million Americans celebrated Kwanzaa, or between one and five percent of African Americans. Mayes added that White institutions now celebrate it.[19] 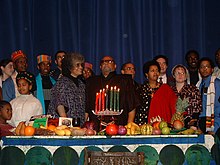 A 2003 Kwanzaa celebration with Kwanzaa founder Maulana Karenga at the center, and others

The National Retail Federation has sponsored a marketing survey on winter holidays since 2004, and in 2015 found that 1.9% of those polled planned to celebrate Kwanzaa – about six million people in the United States.[39]

Starting in the 1990s, the holiday became increasingly commercialized, with the first Hallmark Card being sold in 1992,[40] and there has been concern about this damaging the holiday's values.[41]

Stjepan Meštrović, a sociology professor at the Texas A&M University, sees Kwanzaa as an example of postmodernism. According to Meštrović, post-modernists in modern society may view "real" traditions as racist, sexist or otherwise oppressive, but since living in a world where nothing is true is too terrifying to most people, "nice" and "synthetic" traditions like Kwanzaa have been created to cope with the nihilistic, individualistic modern society.[42]