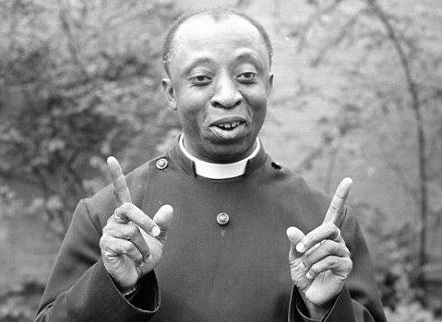 Bishop of Croydon
For the recipient of the Victoria Cross, see Wilfred Wood.

Born in Barbados to Wilfred Coward and Elsie Elmira Wood, Wood initially planned a career in Barbados politics, but felt called to the priesthood and entered Codrington College. He was ordained a deacon on the island, then in England as a priest in St Paul's Cathedral, London, in 1962, first serving as curate at St Stephen's Church, Shepherd's Bush. He married Ina Smith in 1966. They have two daughters and three sons. He soon came to wider attention in the United Kingdom for speaking out on racial justice, and published (with John D. H. Downing) Vicious Circle in 1968, insisting that the churches urgently engage in anti-racist activism. He was elected president of the Institute of Race Relations in 1971, an academic research body which also campaigned for racial justice.

Wood was a champion for racial justice, launching several initiatives and serving on many committees. In 1968, Wood and colleagues submitted proposals for the replacement of the National Committee for Commonwealth Immigrants (NCCI) with a Community Relations Commission that came to be known as "the Wood Proposals". The proposals called for some members to be directly elected by minority ethnic associations. Following the assassination of Martin Luther King Jr. in 1968 and a visit to London by his widow Coretta in 1969, he was instrumental with Canon L. John Collins in founding the UK's Martin Luther King Fund and Foundation.

In 1992 he co-sponsored with David Sheppard, the then Bishop of Liverpool, a new set of race equality principles for employers, which became known as the "Wood-Sheppard Principles".[3] He was Moderator of the Southwark Diocesan Race Relations Commission, the first of its kind in the Church of England, from its foundation. He also served as Moderator of the World Council of Churches's Programme to Combat Racism, 1977 - 1980, which was known for its support for humanitarian projects of southern African liberation movements at a crucial time in their struggle. In his last years as Bishop of Croydon, he protested at the honours given to Enoch Powell upon his death,[4] stating, "Enoch Powell gave a certificate of respectability to white racist views which otherwise decent people were ashamed to acknowledge"[5] and, in 2000 against the then British government's and opposition's negative attitudes to asylum seekers [6]

Wood was also involved in Croydon life outside of the church, serving as a board member for the local Mayday Hospital for more than ten years, and also Chair of the Tramlink Penalty Fares Appeals Panel. In 2002 he was made an Honorary Freeman of the London Borough of Croydon.[2]

He was also Vice-Chair of the Archbishops’ Commission on Urban Priority Areas which undertook two years of explorations of the conditions in inner cities and deprived outer estates and published the explosive report Faith in the City in 1985. It challenged the Thatcher government to give appropriate support to those that were being left behind in deprived areas. It also led to the Church establishing the Church Urban Fund which supported projects in local communities (not only church-based communities).

He holds honorary doctorates from the Open University, the University of the West Indies and the General Theological Seminary, New York, when he was described in the citation as "a wide and trusted defender of the rights of minorities."

On 30 November 2000 – Barbados Independence Day – The Queen appointed Wood a Knight of St Andrew, the highest class within the Order of Barbados "for his contribution to race relations in the United Kingdom and general contribution to the welfare of Barbadians living here".