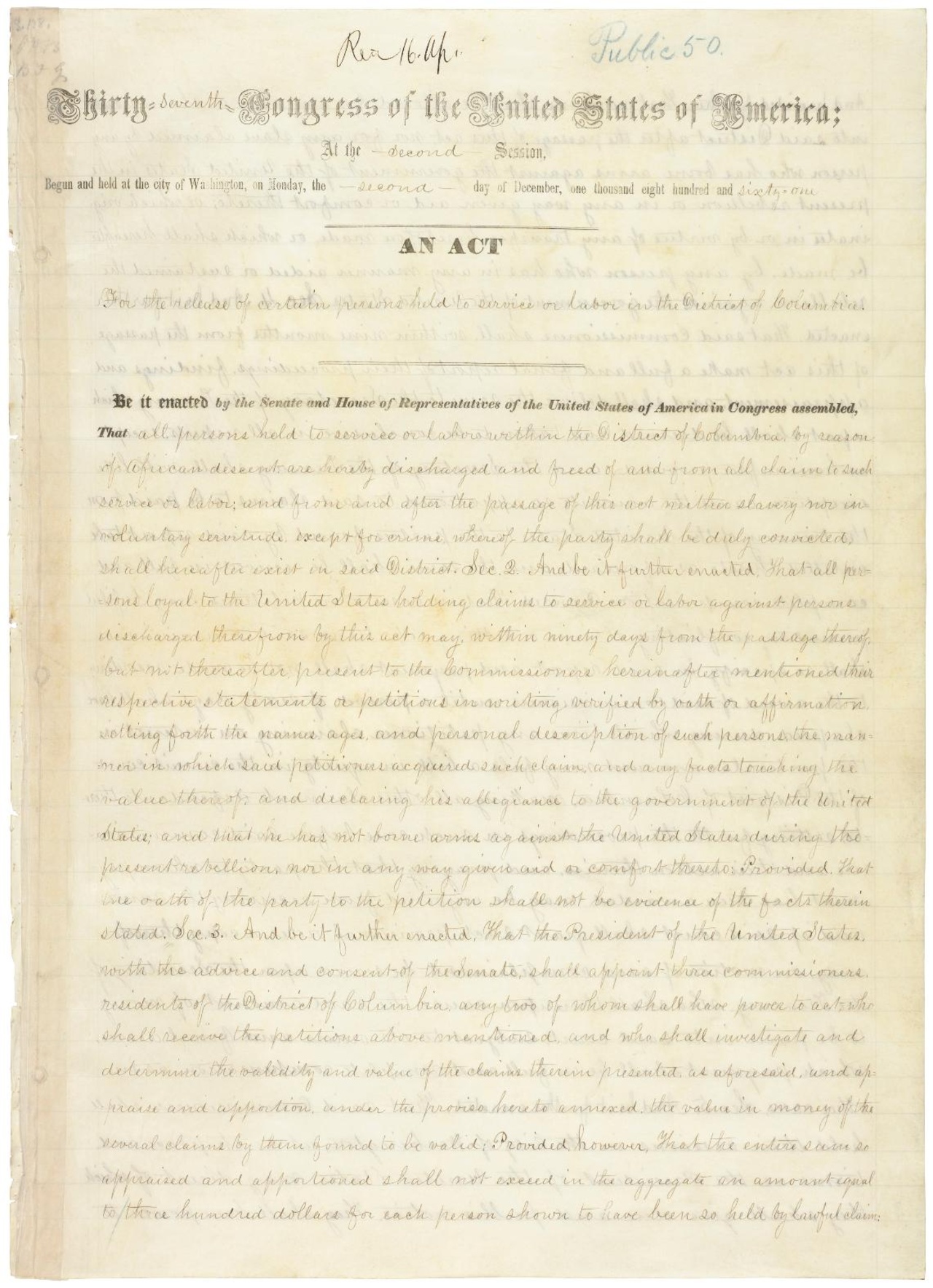 Proposals to eliminate slavery in the District of Columbia date back at least to the gag rules of the later 1830s. In 1848, New York Representative Daniel Gott gave a passionate speech to the House of Representatives against the proposed emancipation of slaves in the District of Columbia.[2] Gott described the actions of abolitionists of the Northern states as "impertinent interference with the slaves" and "impertinently intruding themselves into the domestic and delicate concerns of the South, understanding neither the malady to be corrected nor the remedy to be applied."[2] In 1849, when he was a representative, Lincoln introduced a plan to eliminate slavery in Washington, D.C. by compensated emancipation. The bill failed.[3] The sale and purchase of slaves in Washington D.C. was outlawed by the Compromise of 1850.[4] However, the ownership of slaves in the capitol was not affected and Washington D. C.'s slave owners could still buy and sell slaves in the neighboring states of Virginia and Maryland.

Emancipation in the District of Columbia became possible in 1861 after the departure of the senators and representatives from the seceding states who had blocked the ending of slavery in the district, not wanting emancipation to be legislated anywhere. In December 1861, a bill was introduced in Congress for the abolition of slavery in Washington, D.C.[5] Written by Thomas Marshall Key,[6] and sponsored by Senator Henry Wilson of Massachusetts, the bill passed the Senate on April 3 by a vote of 29 in favor and 14 against.[7] It passed the House of Representatives on April 11.[8][9] Lincoln had wanted the bill to include a provision to make emancipation effective only after a favorable vote from the citizens of the District of Columbia.[10][11] He also wanted the bill to delay implementation until a certain amount of time after the bill was signed.[10] Neither provision was included in the bill.[10][11] Lincoln signed the bill on April 16, 1862,[12] amid ongoing Congressional debate over an emancipation plan for the border states. Following the bill's passage, Lincoln proposed several changes to the act, which were approved by Congress.[13] The commissioners appointed to implement the bill later made a report to Congress listing the names of slaveholders who applied for compensation, the names of people emancipated, and the amounts paid.[14]

The passage of the Compensated Emancipation Act came nearly nine months before the signing of the Emancipation Proclamation. The act immediately emancipated slaves in Washington, D.C. and set aside $1 million[3] to compensate slaveholders loyal to the U.S. government.[15] An additional $100,000[16] allocated by the law was used to pay each newly freed slave $100 if he or she chose to leave the United States and colonize in places such as Haiti or Liberia.[17]

The emancipation plan relied on a three-person Emancipation Commission to distribute the allotted funding. In order to receive compensation, former enslavers were required to provide written evidence of their ownership, as well as state their loyalty to the Union. Most of the petitioners were white, but some blacks also filed for compensation, having once bought their family members away from other owners. In the end, almost all of the $1 million appropriated in the act had been spent.[18] As a result of the act's passage, 3,185 people were freed from slavery.[19] However, fugitive slave laws still applied to people who had fled slavery from Maryland to Washington, D.C. until their 1864 repeal.[19]

Although the compensated emancipation model was never expanded beyond the district, the act, along with the prohibition of slavery in the federal territories a few months later,[20] signified the forthcoming demise of slavery in the United States.[15] The act was the only compensated emancipation plan enacted in the United States.[3]

In Washington, D.C., April 16 has been celebrated as Emancipation Day since 1866. An annual parade was held to commemorate the signing of the act until 1901, when a lack of financial and organizational support forced the tradition to stop;[21] it restarted in 2002.[22] In 2000, the Council of the District of Columbia made April 16 a private holiday—or one on which city employees are not given a free day off—and on July 9, 2004, council member Vincent Orange proposed making the day a public holiday.[23] Emancipation Day was first celebrated as an official city holiday in Washington, D.C. in 2005.[24]

"When Congress passed the DC Emancipation Act in April 1862, giving compensation to 'loyal' owners, Coakley [Gabriel Coakley, a leader of the black Catholic community in Washington] successfully petitioned for his wife and children, since he had purchased their freedom in earlier years. He was one of only a handful of black Washingtonians to make a claim like this. The federal government paid him $1489.20 for eight people that he 'owned' (he had claimed their value at $3,300)."[25]

Following Lincoln's concerns over the version of the bill that he signed, the U.S. Senate approved a supplement to the original Compensated Emancipation Act.[26] The amendment passed on July 12, 1862, allowing former slaves to petition for compensation if their masters had not done so. Under the supplemental act, claims made by blacks and whites were weighted equally, whereas previously, the testimonies of blacks—enslaved or free—were discarded if challenged by a white person.[27][28]